How do I Stop Birds from Flying into My Window?

There are two scenarios in which birds fly into windows. Read through both of them to determine which is happening at your house as they each have different solutions.

Scenario 1: A bird flies into your window and has been injured or died as a result. You notice that this occurs year round.
Scenario 2: You have a bird persistently pecking and flapping around your window. It seems like a healthy bird, but it just won’t leave your window alone. You notice this type of behavior happens only in the spring.

Millions of birds die every year flying to windows, because they can’t tell reflections from trees plants and sky. Most of those windows are on houses. Not all windows are equally hazardous. Check to see which of your windows are reflective and closest to the areas when you see the birds when they are active. Collisions happen more frequently during the spring and fall migration periods. Even small windows can be dangerous as many birds fly into small spaces such as tree cavities or between branches. Research has identified solutions to alter birds to windows. The easiest of these involves applying visible markings to the outside of the windows in patterns that the birds can see while requiring minimal glass coverage to keep your view unobscured. Here are some solutions to this problem: 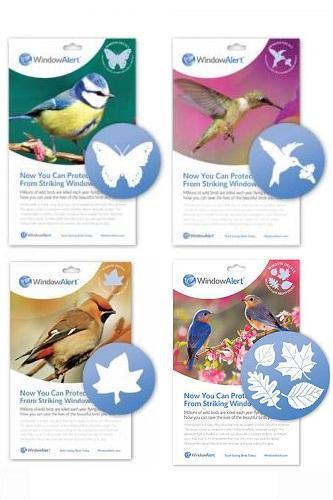 WindowAlert: Now you can protect wild birds from striking windows. WindowAlert is a low-tack decal that may be applied to home and office windows. The decals contain a component which brilliantly reflects ultraviolet sunlight. This ultraviolet light is invisible to humans, but glows like a stoplight for birds. Birds have vision that is up to 12 times better than that of humans. WindowAlert decals help birds see windows and avoid striking the glass. WindowAlert come in a package of 4 decals. WBU McKinney carries several types of WindowAlert designs hummingbirds, butterflies, leaf medley and maple leafs.

Since windows reflect images during the spring time when male birds are defending territories and attracting mates a window can appear like a rival male bird. When a male bird sees it’s reflection in a window or reflective surface it believes it is seeing another competing male bird in its territory and begins an attack. This typically involves flapping and pecking at a window, sometimes for hours on end. It is not only annoying but can be harmful to the birds. A male bird may waste lots of energy attacking its reflection which can leave it exhausted and susceptible to predators. This behavior is typically only a problem in the spring during mating season and eventually will stop. The birds that typically engage in this behavior are Northern Cardinals, Northern Mockingbirds and American Robins. There are two ways to help prevent this behavior...one is to eliminate the reflective qualities of the glass window so it does not act as a mirror, the other is to create a physical barrier between the bird and the window. A light colored or white material placed against the inside of the glass may help to reduce the reflection enough to stop the attacks. This can be newspaper, a sheet, a white window cleaner or other material. Interior vertical blinds (that are light in color) with the slats half open or closed may help. A dark room or dark drapes will actually increase the reflection and encourage more attacks. Here are some other solutions to this problem: